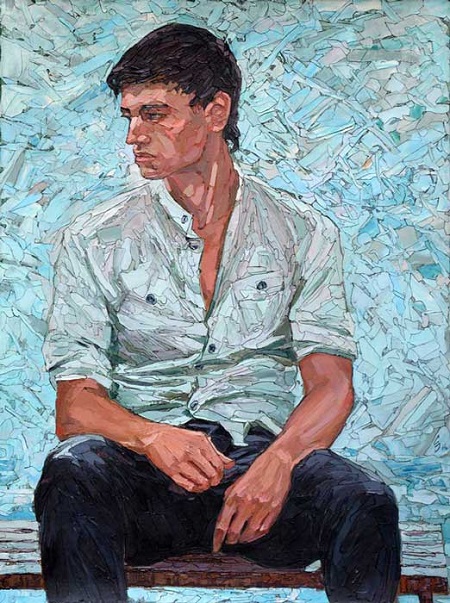 Some are still around: the good news from Russia.
This one is about an unconventional artist, who refused to stop painting exactly what he finds appealing and is most interested in: The fascination of the male nude portrait Sergey Sovkov, born 1972, lives and works in Tolyatti, a city on the shores of the Volga, which is known mostly for their large automobile industry. From 1997 until 2004 Sergey Sovkov passed through a classic academic education in fine arts, which he completed in 2004 at the internationally renowned State Academy ‘Repin’ in St. Petersburg.
A crucial element of his work is, besides still lives and cityscapes, the male nude portrait, in drawings, pastels and above all painted in oil. Whereas these stand out due to their specific and unmistakable technique; especially their richness and choice of colours are a reminder to figural mosaics or expressionistic stained-glass windows.
Without doubt his models are Russian men, who are depicted in their natural environment. That is in Putins weird empire already a fact, which falls under the outlandish laws of ‘homosexual propaganda’. The consequence being that Sergey Sovkov had to resign from his post as a lecturer for fine arts.