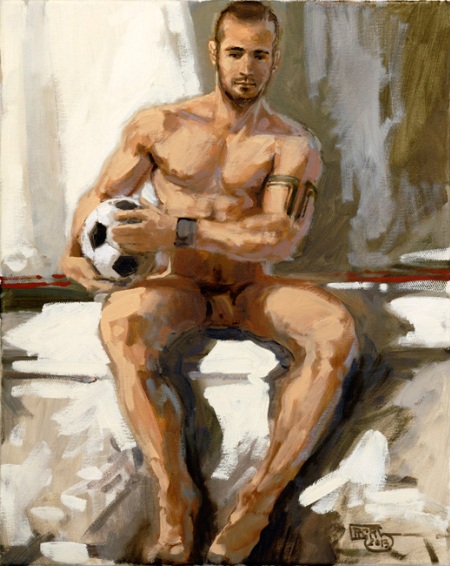 How to summarize a complex novel, a multilayer painting in just a few sentences? This year’s title of Robert C. Rore’s annual exhibition is taken from „The Glass Bead Game“ by Hermann Hesse, a book for which this German-speaking writer was awarded the Nobel Prize in Literature in 1946 when Europe lay in ruins. Hermann Hesse’s „The Glass Bead Game“ is so much more than just a novel, it is a vision, a portrayal of morals and a scathing account of politics in the first half of the 20th century.

Throughout the book, the glass bead game the title refers to remains something of a mystery; it is never properly explained to the readers and left to their imagination, although there are players playing it and competitions are held. Referring to his picture, “The Glass Bead Game Players”, which is presented in a late 19th century frame lavishly restored and in the exhibition will be accompanied by studies and sketches as well as other male portraits, Robert C. Rore says that it cannot be decided whether the glass beads depicted are soap bubbles or not. As with the glass bead game in the novel, answering this question is up to the spectators. So do come and find out for yourself.

We cordially invite you to the opening held on 1 August from 20 hrs. onwards, with the artist being present.

On Saturday, 17 August, there will also be a late opening of the gallery, on occasion of the street party, Hans-Sachs-Straßenfest.

From the night of the first opening onwards, all the exhibits will also be on display at our web-shop.

We are looking forward to seeing you.