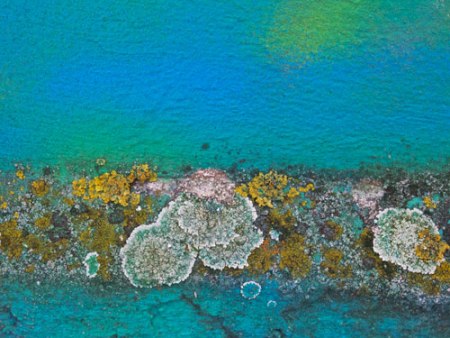 The satire program EXTRA 3, broadcasted since the late 70ies, is our eponym for the upcoming show featuring works by three Munich based photographers. Similar to the TV program the three photographers reflect the reality in their very individual views.

Susanne Jell is known for her ‚orderly‘ fashion of photography and puts common sights like old and weather-beaten surfaces into a new graphical perspective. Thus creating from the old a completely new and fresh, contemporary content. Susanne’s aerial view of a reef is actually – yes, just a lump of moss…

Friederike Wicherts passion lays foremost with nice cars and her hometown Munich. At best, one will find both in her pictures:  providing the car is vintage and the point of view is a spectacular one.

… and who would have thought a few years ago that we invite three female, straight photographers to exhibit their work in the Kunstbehandlung. We are excited to share our view outside the box with you.

All three photographers will attend the opening on 6th of June from 8 pm onwards.