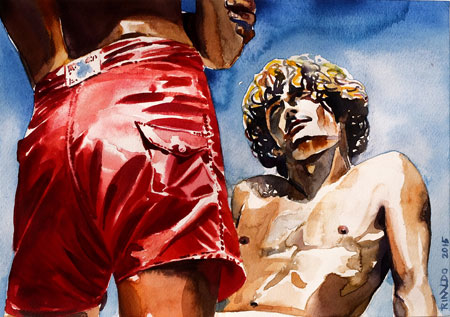 For a ten-year period Rinaldo Hopf took inspiration in the cinematic works of Rainer Werner Fassbinder, Pier Paolo Pasolini and Andy Warhol, interpreted their work in his unique style and created a trilogy of paintings. This creative influence of these three ingenious and nonconformist icons, which crucially shaped visual art of the late 20th century, resulted in an inimitable collection of water colours featuring some protagonists and unforgettable film scenes.

The most recent and last part of the exhibition trilogy ‘Andy’s Candies’ revisits some of Andy Warhol’s key performers like the unforgettable sex symbol Joe Dallesandro, the guys of ‘San Diego Surf and many others more.

Just in time for the opening we are presenting the newly published calendar, showcasing paintings from all three parts of the trilogy also.