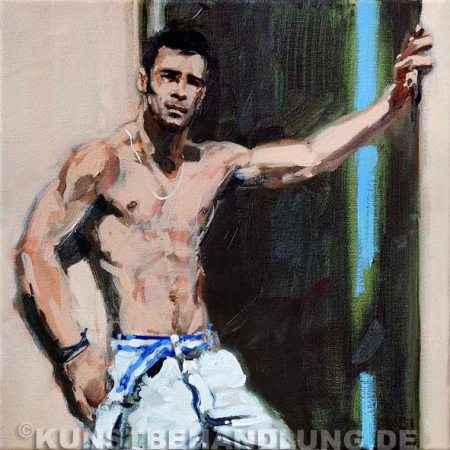 Recently two exhibitions with focus on ’nude men‘ in Linz and Vienna  attracted attention far beyond Austrias borders. However we dare to say that there was hardly any new and originate work on display.
Two brave but somehow well-behaved, rather museum style inventories, which caused, at least, a quite strange and spectacular ’stick-a-sticker-over-the-penis‘ campaign in Vienna. Male nudity inflames passion also at the gateway to the Balkan!

Our exhibition ‚The Male Figure 4‘ is venturing a rather huge step ahead! This show is playground for established artists and a few hitherto little-known talents. Each and every one of the invited artists is keen to express their vision of the ‚Male Figure‘. No more, no less. Dressed or nude  for an artistic eye it makes no difference. After all, a small gesture, a certain pose or a look that plumbed ones very soul can speak volumes and of course nudity might be completely out of place at certain times.

Twelve painters and one photographer create some classic visions and quite a few unforeseen glances on a man and his figure.